One of the most important parts of maintaining a healthy garden or landscape is regular pruning. While it can feel counterintuitive to cut back plants we want to be as large and healthy as possible, it helps keep them healthy from disease as well as allowing the living portions to have more room and sunlight, provides easier access to pollinators and can help slow the spread of disease. It even encourages fruit trees to produce more plentifully! 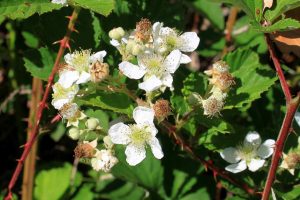 Bushes like blackberries and raspberries are generally known as “brambles”. With good care and tending, these can bring in fruit for you for the next 10-30 years. You may be sensing a theme by now, in how they’re divided for pruning purposes.

Floricanes are bushes that bloom on their canes (shoots from the ground), with buds that were formed on last year’s old growth. If you cut the canes in the first year, you’ll be cutting back all of next year’s fruit. These should be pruned back after fruiting is finished, cutting back to the ground while leaving all canes that haven’t produced berries yet.

Primocanes, fall bearing or ever bearing varieties produce fruit both on the floricanes (2nd year growth) as well as the 1st year primocanes. If you’re growing this type of berry, it’s best to sacrifice next year’s early summer yield by pruning back after the last harvest in fall. This will produce fewer but larger and better tasting berries next year. 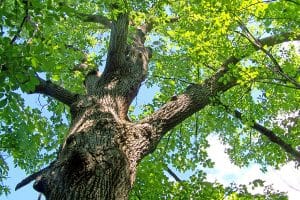 There are two schools of thought when it comes to non-flowering shade and ornamental trees: pruning for strength, and pruning for form. We’ll be concentrating on pruning for form here, as shape and design is somewhat subjective and can easily fill an article on its own.

The ideal in this case is a stable, thriving tree. Healthy trees will still be aesthetically pleasing, but pruning is done to support the shape the tree wants to grow into, rather than selecting branches for shape and symmetry.

When pruning for strength, take care to remove any water sprouts and suckers as well as any branches that rub together and can create wounds in the bark. Prune to keep a stable center of gravity and correct any leaning the tree might be doing due to wind or access to sun.

While a good rule of thumb for most trees and shrubs is to prune in late winter or early spring, good practice is to determine this based on when your plant is blooming.

If your tree or shrub blooms before the end of june, prune old growth immediately after flowering. Flower buds will have developed during the previous season’s growth, so cutting branches down that haven’t had a chance to flower will result in, well, fewer flowers.

Other trees which flower after the end of june very likely grow on new growth, and should be pruned in the standard winter/early spring to allow buds to set during the growing season.

While garden experts will tell you that different fruits are pruned in unique ways, if you’re growing pomme or stone fruits (apples, cherries, peaches, pears, quince, etc) which make up most of what we grow outside the tropics, there’s a simple 3 step process.

Remove all wood that is dead, damaged or diseased, as well as any watersprouts or suckers. With all these cuts, make sure to prune back flush to the larger limb your branch is growing from rather than leaving stubs.

Remove any branches that grow downward, towards the center of the tree or that cross paths with another branch. Look for places where multiple branches compete with each other, leaving 6-12 inches of air space around the larger branches. This will allow light and air into the canopy, boosting fruit production and lowering your risk of pests and diseases.

Prune back the outermost growth so that the branches are shorter and thicker as the grow, keeping them safe from bending and breaking under the weight of its own fruit. Cut back around 20% to 30% of last year’s growth, and cut partially down into each branch rather than down to the parent limb as we did in the last two steps. 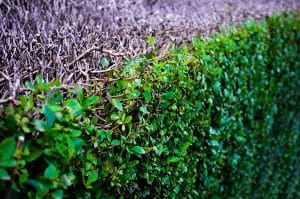 Prune in late winter, when the plants are dormant and haven’t started producing any buds yet. When new buds are pruned off, that’s wasted energy that the plant could have put toward another purpose. Evergreens in particular are quite slow growing, so make sure to prune them as early in the season as possible so nothing is wasted. 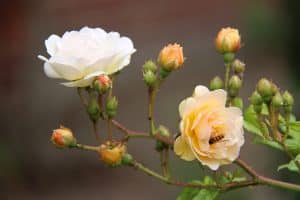 Unlike hedges and evergreens, roses are actually stimulated by pruning, so care should be taken not to prune too late/early in the season to keep any tender new shoots from freezing.

Rejuvenate your roses with an annual springtime pruning. Clear out all branches narrower than a pencil, as well as any diseased or broken wood. Choose the 6-8 strongest canes to an overall height of 18” – 24” and enjoy bigger, healthier blooms. 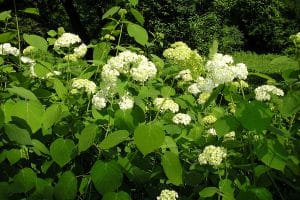 If you have blue or pink hydrangeas, or white blooms with huge oakleaf shaped leaves, you have a type that blooms exclusively on old wood (or branches from the previous year’s summer.)
Make sure you prune in the summer, before august, to make sure none of next year’s bloom buds are pruned off.

This method is used for varieties that bloom on new wood, which can be pruned to the ground every fall if desired, and will come back beautifully year after year. Prune back less drastically for stronger stems and bigger blooms, or leave them alone, only pruning down diseased or crossing branches. Whatever your chosen method, though, it’s extremely difficult to prevent these beauties from flowering. 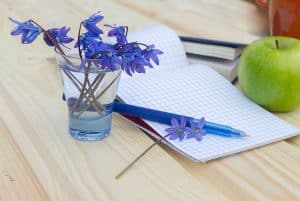 New wood are stems that developed on the plant during the current season.

Old wood are stems that developed on the plant since the summer before the current season.

Removing old blooms on a plant is called “Deadheading.” Almost anything with flowers that doesn’t need to set fruit or seeds can be deadheaded, but care should be taken to only pick them on long stems (essentially a type of pruning) if you know that the bloom buds haven’t set.

A good example of this is the difference between roses and hydrangeas. Because they’re stimulated by new growth, roses can be cut fresh at any length, at any point that flowers are available. Meanwhile, many types of hydrangeas only grow on old wood which should be left on the bush for next year’s batch of flowers.

The term sucker is usually reserved for up through the ground from roots.

Either way, the appearance of these thin, fast growing sprouts is usually regarded as a problem. They take more nutrients and water from portions of the tree with older growth while returning very little benefit to the plant, and the joints between these and the existing plant are generally extremely weak.

What they are, however, is a last ditch effort a plant makes to survive when the parent has been damaged and/or diseased. Consider them a cry for help, and act accordingly.

Most of this advice boils down to a few rules of thumb: cut away dead or diseased growth, prevent branches from rubbing together or setting at weak angles, and in the case of flowering and/or fruiting trees, shrubs and bushes your pruning times will depend on whether they set buds on new or old growth.

If all of this is making your head spin, though, remember that Newberg Landscape Pros is here to do it all- headache free, guaranteed.

Your 2022 Summer Lawn Care Calendar
Summer is here, and we are loving it. Check out this handy calendar to stay on top of your lawn care tasks, and enjoy the fruits of your labor all season long.
Understanding Plant Hardiness and the Growing Season
Do you know which plants have the best chance of surviving the winter? How about which fruits and veggies will provide their full bounty before the growing season ends? All of this and more can be determined by 3 important pieces of information and a little sleuthing. Read on to see how!
Gardening With Our Kids: Favorite Tips and Projects
As the weather warms up, why not head outside with your little ones? There are so many benefits to letting kids get their hands dirty in the garden: let's dig in to some of our favorite projects!